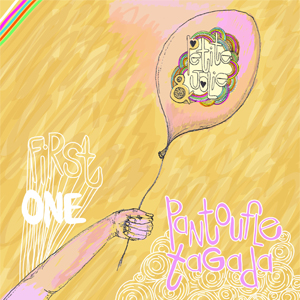 As said on the website, it's been a moment we were thinking about it.
The definition of petite&jolie is clearly in the title, we want to set a cosy place for cute music.

We've been taking our time to contact artists we appreciated to be sure to deliver some lovely tunes that would definitly give the artistic line of this netlabel.

So here we are with our first release named "Pantoufle Tagada", a nice launching compilation for the sake of cuteness

The cuteness will transport you on a pony ride from Purusha's (Ogredung) progtoytronica to papercutz's (Apegenine) childtronica, from Doroasako's progressive folktronica to El zoológico's pizzicato , passing by Original Recipe's (Vinyl Republik) fresh pianopop to kaneel's (Camomille, Ogredung) "joie de vivre" glitchtronics, vim's (Monotonik) spring melodies to fah's (Ronin) analog cute-acid without forgetting surasshu's (Apegenine, Camomille) electro music with video game gimmicks while balùn people (Aerotone) are coming up with their cutey electropop and dot tape dot (spar.RK, NatureBliss) rejoins with his toy harp and trumpet experiments. In the meantime, makunouchi bento (Camomille, Ogredung, One) will delight your ears during a sweet and tender music box interlude for your christmas parties while Nej will come up with some sweet electropop and treacle (BEE Records) will bring back the groove to some cutetronica.

this compilation will act like the exact time-travel machine you needed to bring you back some childhood reminiscences, so we hope you'll enjoy this 55 minutes long launching compilation as much as we enjoyed setting this all up.

Since it is a concept album built around the idea of cuteness, I was expecting to hear cute genres, cute instrumentations, and so forth, but I was surprised to hear a lot of not-so-cute sounds organized into not-so-cute structures in several of the songs. I prefer concept albums to be very tightly conceived and enacted, so I was disappointed by this, though the quality of the album is very good otherwise.

I'll start with the tracks that were not as conceptually accurate as they could be, to my understanding.

Fah's "I Hope You're Happy with Me", one of my favorite tracks on the release, is very cute and pretty at the beginning, but moves into some blatantly detuned parts which do not evoke childhood, nostalgia or otherwise cute things, and then moves into a powerful climactic section which is resolute and experienced. These qualities improve the song, but they detract from the element of cuteness.

Another of my favorite tracks, Vim's "That Smell of Spring Rain" is vaguely evocative of the lushness of Japan's traditional Noh. The simplicity of the bell-like and videogame-esque instrumentation helps to keep the song somewhat kawaii, but the beautiful layering and dynamics sometimes distract from that.

Dot tape dot's "farpa (toy harp & plastic trumpet serenade)" is an enjoyable track, successful for the fact that it is aesthetically pleasing though it is what we still call experimental (though what is being done is no longer an experiment.) It is pretty, but not youthful, except in its out-of-place sped-up vocal samples.

Je reviendrai's "Doroasako" is cute in the way that Ghost in the Shell: Innocence is cute. It has the sound of a previously-troubled adult escaping into the bewitching nostalgia of childhood, so far separated from it that the childhood might belong to someone else. The element is certainly there, but it is beneath other ideas.

Nej's "Tell You" is moody minimalistic electronic pop and Original Recipe's "Puppy" is electronic soft pop rock. There's little more I want to say about them than that they're good, not particularly unique, and not cute.

I cannot very easily imagine Surasshu producing anything I would consider cute, and "5am" is not out to prove me wrong, though it is more laid-back than his usual work, and of the same exalted oldschool videogame quality.

"Alicia" is especially worthy of laud for it's ability to be undeniably childish at the same time that it is especially maturely composed, arranged, and layered.

All of the same may be said about my favorite song, "Pyjama Lapin" by Kaneel, which is astonishing
in the contrast of complexity and simple, childlike mood. This is among his most approachable tracks, but it does not compromise glitch or any of his other stylization decisions to accomplish that.

"Two Mechanical Snowghosts" is almost automatically fitting of the album because of it's music box instrumentation, and it's gripping melancholic melody is fitting to that.

"Lembras-te?" is, in my opinion, film music suitable to the ending or ending credits of an early 90's or late 80's feature-length fantasy anime, or perhaps even an American cartoon.


Reviewer: OverCoat - favoritefavoritefavoritefavorite - November 13, 2007
Subject: Off to a Great Start!
Really enjoyed this comp. A few of my favourite artists make it on this release, like Vim!, Surasshu, and OFCOURSE KANEEL. Also, I was pleasantly surprised by the artists I haven't heard of yet, though I probably should have. "Alicia" by Balun is a nice track and one of the best on this album. Papercutz's "Lembras-te?" is another good track, and a fitting outro track [always gotta have a fitting outro track!].

I'm keeping tabs on this new netlabel and looking forward to the next release :)